Facts about Maggie Island that make it Destination Awesome ​

We will keep adding awesome facts about Magnetic Island each week - so keep an eye out!

Magnetic Island is home to 22 species of plants and animals that are listed as endangered, rare or vulnerable. 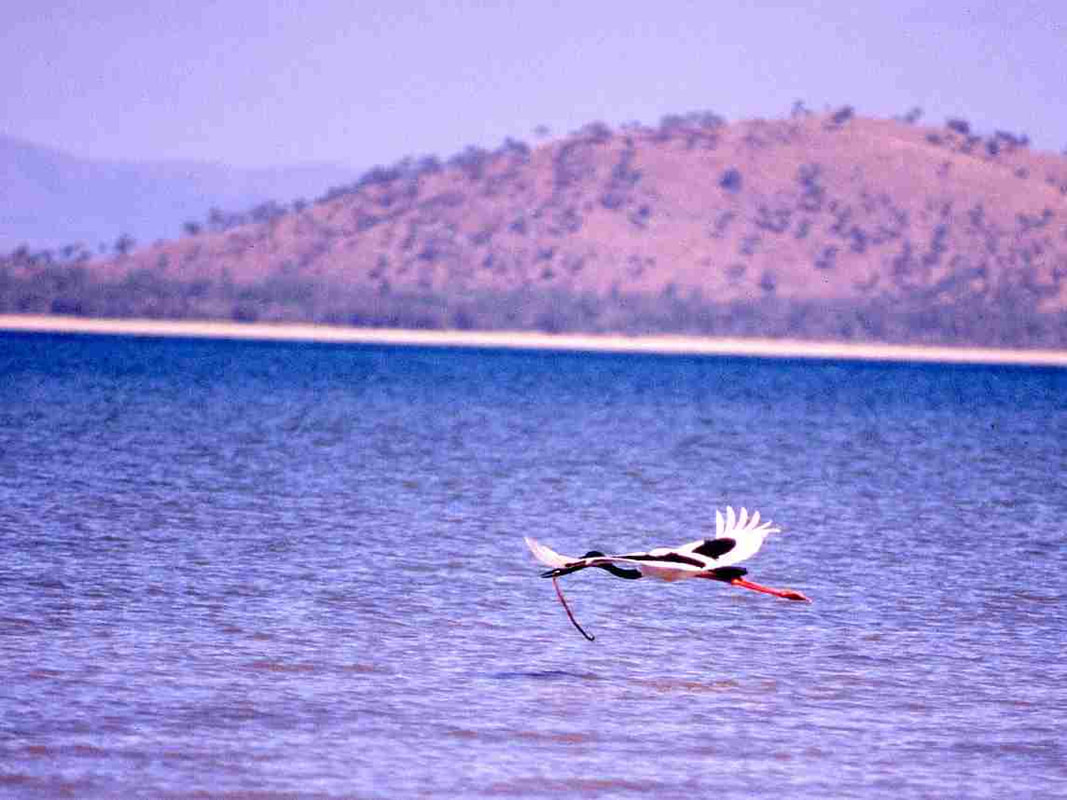 This amazing photo of a Jabiru was taken at Bolger Bay on Magnetic Island. Yep - that thing hanging from it's beak is a sea snake & what a treat it was to see a Jabiru go fishing
Jabiru
​
The 'Black Necked Stork' ( Ephippiorhynchus asiaticus ​) which is also called a "Jabiru" is listed as rare under the Queensland Nature Conservation Act

The Black-necked Stork is the only stork found in Australia. With black and white body plumage, glossy dark green and purple neck and massive black bill, it is easily identified from all other Australian birds. The legs are long and coral-red in colour. The female is distinguished by its yellow eye. Immature birds resemble adults, but the black plumage is replaced by brown and the white plumage is duskier. 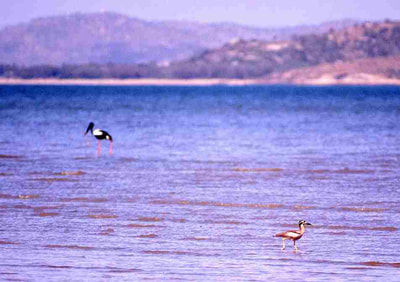 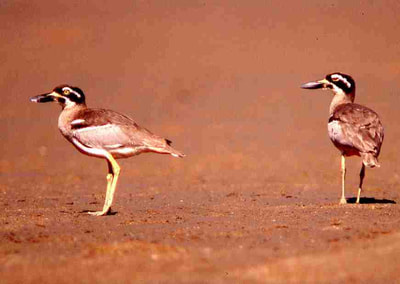 The beach stone-curlew is a very large thick-set wader that is readily distinguished from all other waders by its large size, massive bill with yellow patches at the base, and bold black and white pattern on the head.
Adult beach stone-curlews have a large head, slightly uptilted bill, hunched profile, stout legs and thick 'knees' (ankles). The upper body, forehead, crown and nape are grey-brown with a distinctive black and white pattern on its face, shoulders and secondary wings. The shoulder is grey-brown and bordered by white, separating it from the remainder of the wing which is grey. The throat and breast are a paler grey-brown and the belly is white.
The bill is predominantly black with a yellow base and the eyes and legs are yellow. In flight, the flight feathers are mostly black with a large white patch on the back of the flight feathers.
Young beach stone-curlews are similar to the adults, except the yellow at the base of the bill is dull and the eye-brow stripe is broken by black above the eye and the grey-brown feathers on the back are edged with white.

The beach stone-curlew is usually found on open, undisturbed beaches, islands, reefs, and estuarine intertidal sand and mudflats, preferring beaches with estuaries or mangroves nearby. However, this species also frequents river mouths, offshore sandbars associated with coral atolls, reefs and rock platforms, and coastal lagoons.
The beach stone-curlew has been observed around the north coast of Australia and associated islands from Derby in Western Australia to the Manning River in New South Wales. The species has largely disappeared from the south-eastern part of its former range, and is now rarely recorded on ocean beaches in New South Wales. In Queensland, beach stone-curlews are uncommon on beaches in the south of the state but numbers gradually increase northward.
​
Life history and behaviour

Beach stone-curlews are largely sedentary, with young birds not moving very far from the parental territory. Beach stone-curlews are usually solitarily or in pairs, although occasionally small groups of up to five birds can be observed. The activity of beach stone-curlews is largely dictated by tides. At high tide, they can be found roosting in the shade of trees or at fringes of mangroves. When resting they are often seen standing on one leg or squatting with their feet forward under their body, similar to other waders. At low tide they move out onto the exposed intertidal mudflats, sandflats, sandbanks and sandpits to feed on crabs and other marine invertebrates.
Beach stone-curlews breed from September to February. Their nests can often be located on sandbanks, sandpits, or islands in estuaries, coral ridges, among mangroves or in the sand surrounded by short grass and scattered casuarinas (she-oaks). Typically one egg is laid per season but a second may be laid if the first is lost. Both parents care for the hatchling who remains dependant on them for 7 to 12 months.
During the night, breeding beach stone-curlews use a harsh, wailing territorial call which is higher pitched, harsher and less fluty than that of the bush stone-curlew. When alarmed, the species may vocalise with a wealyapping.

The stronghold for this species in Queensland is on the Great Barrier Reef, where threatening processes for these birds are very few (Milton 1998). On the mainland, threatening processes for beach stone-curlews include pollution due to residential and industrial development. Feral cats, dogs and pigs are also a threat due to predation of adults, chicks and eggs. Human disturbance from activities such as walking dogs off their leashes, boating, off-road vehicles and beach-combing can also severely impact on the natural behaviour of these birds. 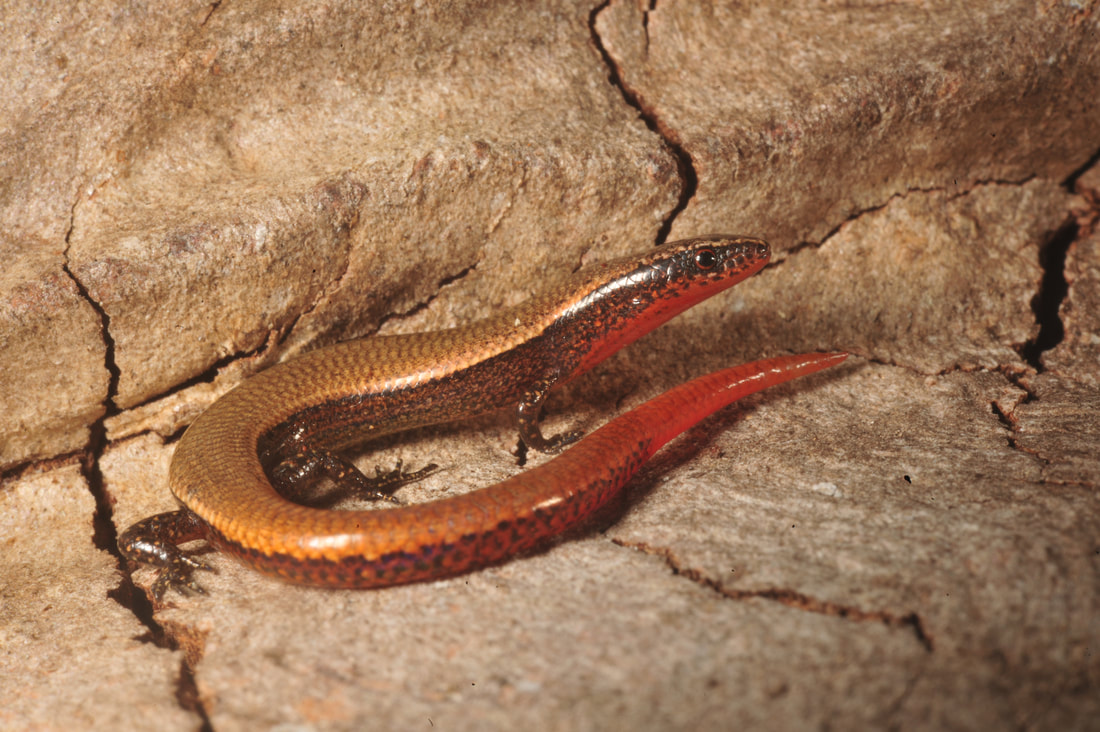 Description
​The Magnetic Island dwarf skink is a small, ground dwelling skink that grows up to 63 mm. The species is marked with shades of brown with some gold flecking and an oily bluish sheen over some of the scales. The pale mid-lateral stripe is absent, although a narrow side strip on the upper side is present and the flanks (sides) are dark brown.

Habitat and distribution
​The Magnetic Island dwarf skink is endemic to Queensland and is known only from Magnetic Island. The species may occur on parts of the nearby mainland, but no targeted surveys have been conducted to confirm this.
Within the lowland areas, the skink appears to prefer seasonally dry Melaleuca swamps and areas with thick leaf litter. It is not known whether the skink occurs on the granite boulder hills that dominate the island. 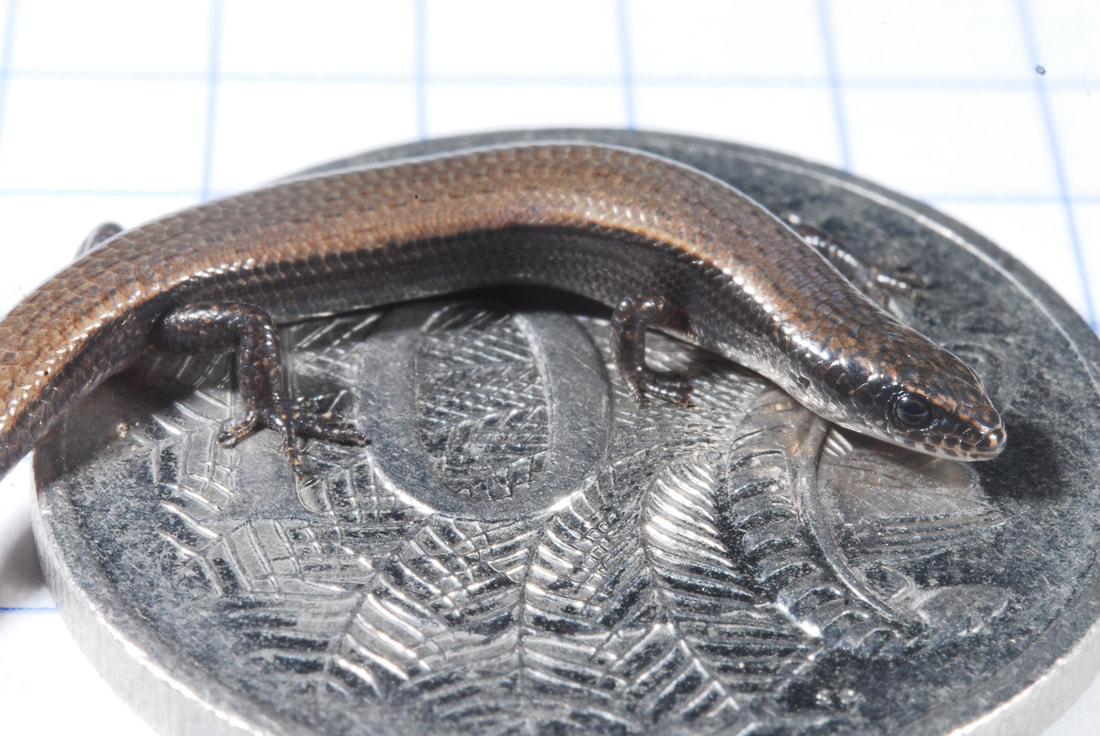 Relative size of the Dwarf Skink to a 10 cent piece

The Rainbow Serpent at Arcadia

The traditional owners of the Townsville and Magnetic island region are the Wulgurukaba people or the 'canoe people'
Gabul, the Rainbow Serpent is an important part of the Wulgurukaba tradition.

The creation story tells of how when a rainbow is seen in the sky, it is supposed to be the Rainbow Serpent traveling from one waterhole to another.

Gabul formed the landscape and islands between Ingham and Townsville as he travelled down from the Herbert River all the way to Ross River. This includes the islands of Hinchinbrook, Palm and Magnetic.

And his travelled south his body broke up leaving parts along the coast. The tail of the snake is at Halifax Bay, his body at Palm Island and his head rests at the headland at Arcadia on Magnetic Island. 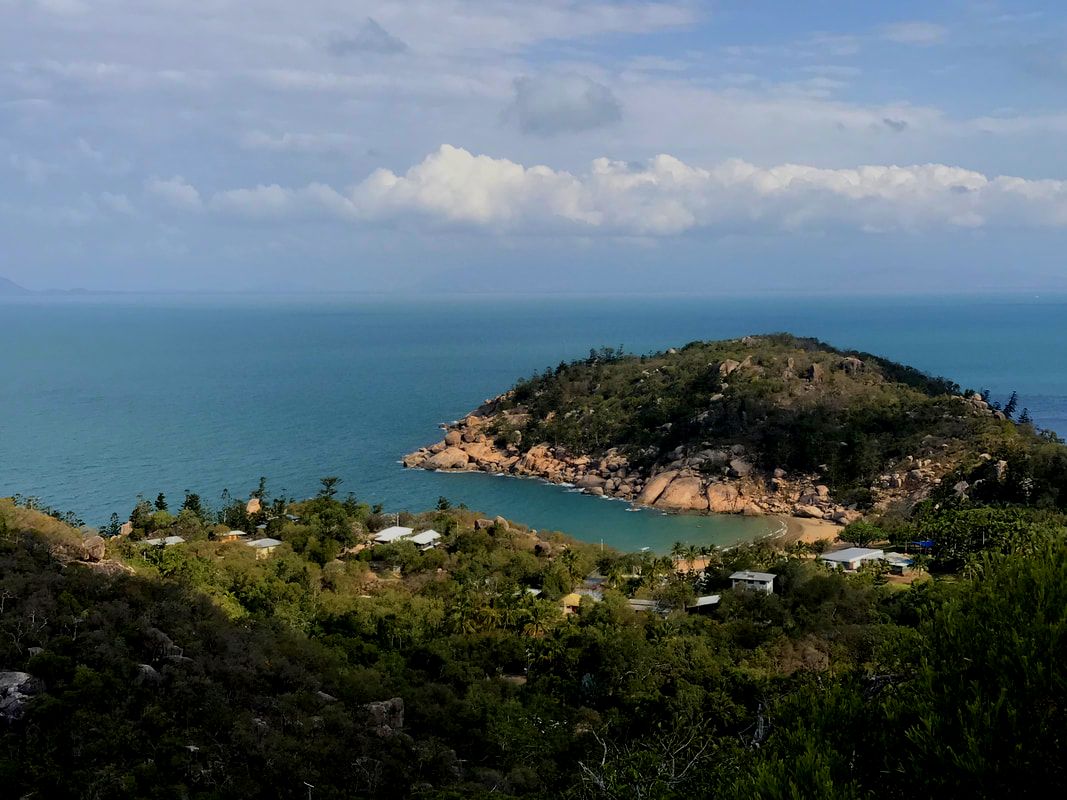